From NYTimes, By NICK BILTON, 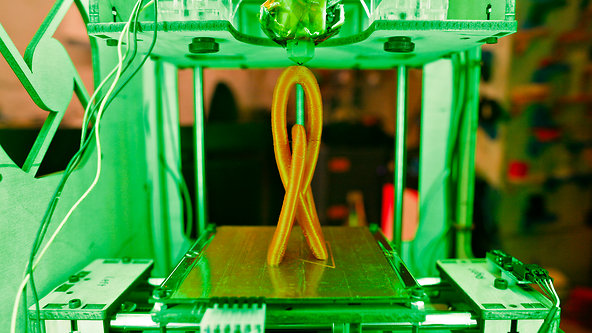 Downloading — quite often stealing, in the eyes of the law — music, movies, books and photos is easier than bobbing for apples in a bucket without water. It has kept legions of lawyers employed fighting copyright violations without a whole lot to show for their efforts in the past decade.You think that was bad? Just wait until we can copy physical things.

It won’t be long before people have a 3-D printer sitting at home alongside its old inkjet counterpart. These 3-D printers, some already costing less than a computer did in 1999, can print objects by spraying layers of plastic, metal or ceramics into shapes. People can download plans for an object, hit print, and a few minutes later have it in their hands.

Call it the Industrial Revolution 2.0. Not only will it change the nature of manufacturing, but it will further challenge our concept of ownership and copyright. Suppose you covet a lovely new mug at a friend’s house. So you snap a few pictures of it. Software renders those photos into designs that you use to print copies of the mug on your home 3-D printer.

Did you break the law by doing this? You might think so, but surprisingly, you didn’t.

What about a lamp, a vase, an iPhone protective cover, board game pieces, wall hooks, even large pieces of furniture? In each of these cases, if you copy them, it’s highly unlikely that you’re breaking any copyright laws.

“Copyright doesn’t necessarily protect useful things,” said Michael Weinberg, a senior staff attorney with Public Knowledge, a Washington digital advocacy group. “If an object is purely aesthetic it will be protected by copyright, but if the object does something, it is not the kind of thing that can be protected.”

When I posed my mug scenario to Mr. Weinberg, he responded: “If you took that mug and went to a pottery class and remade it, would you be asking me the same questions about breaking a copyright law? No.” Just because new tools arrive, like 3-D printers and digital files that make it easier to recreate an object, he said, it doesn’t mean people break the law when using them.

But it could turn design and manufacturing into the Wild West. That’s already happening on Thingiverse, a free online site that offers schematics of more than 15,000 objects. Thomas Lombardi, a 3-D printer owner and regular contributor to Thingiverse, uploaded a free design for a “Lucky Charms Cereal Sifter.” This brilliant piece of American engineering is a cup with several holes in the bottom. When you pour Lucky Charms cereal into the sifter and shake it from side to side, the cereal falls through the holes and the marshmallow charms — clearly the most sought-after part of the product — stay in the sifter, leaving you with nothing but marshmallowy goodness to pour into a bowl.

After Mr. Lombardi posted his invention on Thingiverse, someone else downloaded the design and began selling a finished Lucky Charms Cereal Sifter on a competing Web site for $30.

Because the sifter is a useful object (although some might argue otherwise) and not simply decorative, there was nothing Mr. Lombardi could have done to stop them.

A recent research paper published by the Institute for the Future in Palo Alto, Calif., titled “The Future of Open Fabrication,” says 3-D printing will be “manufacturing’s Big Bang.” as jobs in manufacturing, many overseas, and jobs shipping products around the globe are replaced by companies setting up 3-D fabrication labs in stores to print objects rather than ship them.

The disregard for copyright smoothes the way for this shift. Downloading music online prospered because it was quicker and easier to press a button than go to a store to buy a CD. Given the choice to download a mug, or deal with Ikea on a Saturday afternoon, which one do you think you would choose?