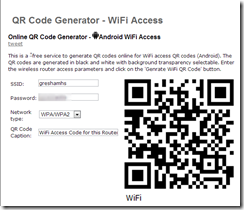 Want to make it so that your WiFi Router is easier to access for guests?

This is a free service to generate QR codes online for WiFi access QR codes (Android).

Google providing higher speed networks to Starbucks.  This would be fun in my neighborhood.  Of course, when they turn off my phone because they wish to control precisely what I do with it, my favorite company will have bitten me.   But it sounds so good.  Is Google now Apple on control?  Say it isn’t so.

Coffee shop + Internet—it’s a pairing that many of us have come to rely on. WiFi access makes work time, downtime, travel time and lots of in-between times more enjoyable and productive. That’s why we’re teaming up with Starbucks to bring faster, free WiFi connections to all 7,000 company-operated Starbucks stores in the United States over the next 18 months. When your local Starbucks WiFi network goes Google, you’ll be able to surf the web at speeds up to 10x faster than before. If you’re in a Google Fiber city, we’re hoping to get you a connection that’s up to 100x faster.

Google has long invested in helping the Internet grow stronger, including projects to make Internet access speedier, more affordable, and more widely available. The free Internet connection at Starbucks has become an important part of many communities over the years, such as in the aftermath of Hurricane Sandy, or for students without Internet at home who do their homework at Starbucks.

We’ll start rolling out the new networks this August. We appreciate your patience if it’s still a little while before we get to your favorite Starbucks—you’ll know your new network is ready to go when you can log in to the “Google Starbucks” SSID.