Stretching: The Truth – REPRINTED from the NYTimes

WHEN DUANE KNUDSON, a professor of kinesiology at California State University, Chico, looks around campus at athletes warming up before practice, he sees one dangerous mistake after another. “They’re stretching, touching their toes. . . . ” He sighs. “It’s discouraging.” 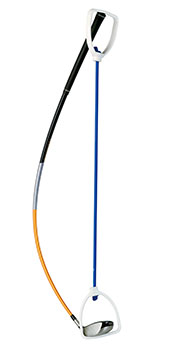 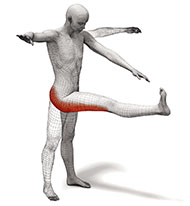 STRAIGHT-LEG MARCH (for the hamstrings and gluteus muscles)Kick one leg straight out in front of you, with your toes flexed toward the sky. Reach your opposite arm to the upturned toes. Drop the leg and repeat with the opposite limbs. Continue the sequence for at least six or seven repetitions.

SCORPION (for the lower back, hip flexors and gluteus muscles) Lie on your stomach, with your arms outstretched and your feet flexed so that only your toes are touching the ground. Kick your right foot toward your left arm, then kick your left foot toward your right arm. Since this is an advanced exercise, begin slowly, and repeat up to 12 times.

HANDWALKS (for the shoulders, core muscles and hamstrings) Stand straight, with your legs together. Bend over until both hands are flat on the ground. ‘‘Walk’’ your hands forward until your back is almost extended. Keeping your legs straight, inch your feet toward your hands, then walk your hands forward again. Repeat five or six times.

If you’re like most of us, you were taught the importance of warm-up exercises back in grade school, and you’ve likely continued with pretty much the same routine ever since. Science, however, has moved on. Researchers now believe that some of the more entrenched elements of many athletes’ warm-up regimens are not only a waste of time but actually bad for you. The old presumption that holding a stretch for 20 to 30 seconds — known as static stretching — primes muscles for a workout is dead wrong. It actually weakens them. In a recent study conducted at the University of Nevada, Las Vegas, athletes generated less force from their leg muscles after static stretching than they did after not stretching at all. Other studies have found that this stretching decreases muscle strength by as much as 30 percent. Also, stretching one leg’s muscles can reduce strength in the other leg as well, probably because the central nervous system rebels against the movements.

“There is a neuromuscular inhibitory response to static stretching,” says Malachy McHugh, the director of research at the Nicholas Institute of Sports Medicine and Athletic Trauma at Lenox Hill Hospital in New York City. The straining muscle becomes less responsive and stays weakened for up to 30 minutes after stretching, which is not how an athlete wants to begin a workout.

THE RIGHT WARM-UP should do two things: loosen muscles and tendons to increase the range of motion of various joints, and literally warm up the body. When you’re at rest, there’s less blood flow to muscles and tendons, and they stiffen. “You need to make tissues and tendons compliant before beginning exercise,” Knudson says.

A well-designed warm-up starts by increasing body heat and blood flow. Warm muscles and dilated blood vessels pull oxygen from the bloodstream more efficiently and use stored muscle fuel more effectively. They also withstand loads better. One significant if gruesome study found that the leg-muscle tissue of laboratory rabbits could be stretched farther before ripping if it had been electronically stimulated — that is, warmed up.

To raise the body’s temperature, a warm-up must begin with aerobic activity, usually light jogging. Most coaches and athletes have known this for years. That’s why tennis players run around the court four or five times before a match and marathoners stride in front of the starting line. But many athletes do this portion of their warm-up too intensely or too early. A 2002 study of collegiate volleyball players found that those who’d warmed up and then sat on the bench for 30 minutes had lower backs that were stiffer than they had been before the warm-up. And a number of recent studies have demonstrated that an overly vigorous aerobic warm-up simply makes you tired. Most experts advise starting your warm-up jog at about 40 percent of your maximum heart rate (a very easy pace) and progressing to about 60 percent. The aerobic warm-up should take only 5 to 10 minutes, with a 5-minute recovery. (Sprinters require longer warm-ups, because the loads exerted on their muscles are so extreme.) Then it’s time for the most important and unorthodox part of a proper warm-up regimen, the Spider-Man and its counterparts.

“TOWARDS THE end of my playing career, in about 2000, I started seeing some of the other guys out on the court doing these strange things before a match and thinking, What in the world is that?” says Mark Merklein, 36, once a highly ranked tennis player and now a national coach for the United States Tennis Association. The players were lunging, kicking and occasionally skittering, spider-like, along the sidelines. They were early adopters of a new approach to stretching.

While static stretching is still almost universally practiced among amateur athletes — watch your child’s soccer team next weekend — it doesn’t improve the muscles’ ability to perform with more power, physiologists now agree. “You may feel as if you’re able to stretch farther after holding a stretch for 30 seconds,” McHugh says, “so you think you’ve increased that muscle’s readiness.” But typically you’ve increased only your mental tolerance for the discomfort of the stretch. The muscle is actually weaker.

Stretching muscles while moving, on the other hand, a technique known as dynamic stretching or dynamic warm-ups, increases power, flexibility and range of motion. Muscles in motion don’t experience that insidious inhibitory response. They instead get what McHugh calls “an excitatory message” to perform.

Dynamic stretching is at its most effective when it’s relatively sports specific. “You need range-of-motion exercises that activate all of the joints and connective tissue that will be needed for the task ahead,” says Terrence Mahon, a coach with Team Running USA, home to the Olympic marathoners Ryan Hall and Deena Kastor. For runners, an ideal warm-up might include squats, lunges and “form drills” like kicking your buttocks with your heels. Athletes who need to move rapidly in different directions, like soccer, tennis or basketball players, should do dynamic stretches that involve many parts of the body. “Spider-Man” is a particularly good drill: drop onto all fours and crawl the width of the court, as if you were climbing a wall. (For other dynamic stretches, see the sidebar below.)

Even golfers, notoriously nonchalant about warming up (a recent survey of 304 recreational golfers found that two-thirds seldom or never bother), would benefit from exerting themselves a bit before teeing off. In one 2004 study, golfers who did dynamic warm- up exercises and practice swings increased their clubhead speed and were projected to have dropped their handicaps by seven strokes over seven weeks.

Controversy remains about the extent to which dynamic warm-ups prevent injury. But studies have been increasingly clear that static stretching alone before exercise does little or nothing to help. The largest study has been done on military recruits; results showed that an almost equal number of subjects developed lower-limb injuries (shin splints, stress fractures, etc.), regardless of whether they had performed static stretches before training sessions. A major study published earlier this year by the Centers for Disease Control, on the other hand, found that knee injuries were cut nearly in half among female collegiate soccer players who followed a warm-up program that included both dynamic warm-up exercises and static stretching. (For a sample routine, visitwww.aclprevent.com/pepprogram.htm.) And in golf, new research by Andrea Fradkin, an assistant professor of exercise science at Bloomsburg University of Pennsylvania, suggests that those who warm up are nine times less likely to be injured.

“It was eye-opening,” says Fradkin, formerly a feckless golfer herself. “I used to not really warm up. I do now.”

These exercises- as taught by the United States Tennis Association’s player-development program – are good for many athletes, even golfers. Do them immediately after your aerobic warm-up and as soon as possible before your workout.

(for the hamstrings and gluteus muscles)

Kick one leg straight out in front of you, with your toes flexed toward the sky. Reach your opposite arm to the upturned toes. Drop the leg and repeat with the opposite limbs. Continue the sequence for at least six or seven repetitions.

(for the lower back, hip flexors and gluteus muscles)

Lie on your stomach, with your arms outstretched and your feet flexed so that only your toes are touching the ground. Kick your right foot toward your left arm, then kick your leftfoot toward your right arm. Since this is an advanced exercise, begin slowly, and repeat up to 12 times.

(for the shoulders, core muscles, and hamstrings)