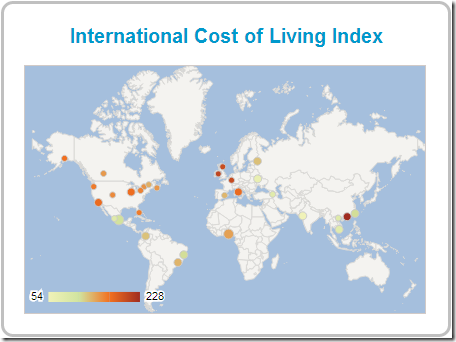 From Citylab on The Atlantic, finally I can figure out what it costs to teach abroad

… when wanderers wonder if their salary might stretch further in Barcelona or Milan, why not direct them to the experience of their peers? That’s the premise of Expatistan, a user-generated cost of living index designed by web developer Gerardo Robledillo.

After studying various reports from the United Nations and national governments, he devised a survey featuring several dozen common indicators of the cost of living — the price of a monthly transit pass, a pint of beer, a house cleaner, and so on. (National indicators alone, Robledillo says, were not so useful as source material: "The differences between a capital city and a smaller city are way bigger than different capitals from different countries.")

Since Expatistan launched in January 2010, users have entered more than 600,000 points of price data. Each individual question factors into one of six categories — like Transportation, or Housing — which then produce a final comparative judgment: "Cost of living in London is 8 percent more expensive than in New York City," or "Cost of living in Paris is 132 percent more expensive than in Budapest."

Since no government data goes into these calculations, the figures reflect the biases of the users. …..